You are in : All News > Dutch doctors call for energy drinks ban for under 18s, Negative health effects reported in Canadian youth 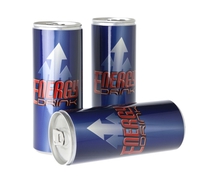 The Dutch Society for Pediatrics made its calls in an article in the Dutch newspaper Algemeen Dagblad yesterday. According to the doctors, it is not uncommon for young people aged 12 and over to drink six cans or more per day, which can lead to serious health problems.

"When young people end up in our office with restlessness or heart rhythm disorders, we can think about all sorts of things in order to determine the cause. But we notice that energy drinks are more and more often the reasont," pediatrician Brita de Jong-Van Kempen is quoted in the article.

Energy drinks contain 3 times as much caffeine as soft drinks: 32 milligrams per 100 milliliters, compared to 10 milligrams per 100 milliliters. The maximum recommended amount of caffeine in children is 2.5 milligrams per kilogram of body weight per day. There are also large amounts of taurine in energy drinks. Taurine is a type of amino acid that occurs naturally in our body. It stimulates the nervous system and is released during exercise and in periods of stress. In addition, a can of energy drink contains about 9 lumps of sugar, as much as a can of cola.

However, according to the doctors, this is not enough. "This is not an innocent soft drink. A ban makes parents and children think, so that they are aware of the consequences. It used to be normal to drink alcohol at a young age, but now we know how harmful it is. We can wait until fatal incidents happen or we can take measures so that we can investigate the consequences,” according to De Jong-Van Kempen in the paper.

There is little enthusiasm about a ban from the Ministry of Health, Welfare and Sport, however, which sees more benefits in providing information through, for example, schools and sports clubs. “There are more products that you cannot consume or consume in moderation for your health. Prohibiting is therefore not the solution,” says a spokesman for the Ministry in Algemeen Dagblad.

The news comes as a new study finds that over half of Canadian youth and young adults who have consumed energy drinks have experienced negative health effects as a result, according to a study from the University of Waterloo.

In a nationwide survey of Canadian youth, over half of those who had ever consumed an energy drink had reported experiencing an adverse health event, including rapid heartbeat, nausea, and in rare cases, seizures.

Currently, Canadian legislation is meant to prohibit energy drinks from being marketed to children and energy drinks are not recommend to be used by people participating in sporting activities.

"Most risk assessments to date have used coffee as a reference for estimating the health effects of energy drinks; however, it is clear these products pose a greater health risk," said David Hammond a Professor in the School of Public Health at the University of Waterloo. "The health effects from energy could be due to the different ingredients than coffee, or the ways in which they consumed, including with alcohol or during physical activity; regardless, the findings suggest a need to increase surveillance of health effects from these products."

In conducting the study, the researchers surveyed 2,055 young Canadians aged 12 to 24. Of those that had reported consuming energy drinks at some point in their lives, 55.4 percent reported experiencing an adverse health event.

"The number of health effects observed in our study suggests that more should be done to restrict consumption among children and youth," said Hammond. "At the moment, there are no restrictions on children purchasing energy drinks, and they are marketed at the point-of-sale in grocery stores, as well as advertising that targets children."

Starbucks is stepping into the energy market with a ready-to-drink (RTD) beverage, developed in collaboration with PepsiCo. Dubbed Baya Energy, the carbonated drink... Read More

E-sports players have better eating habits than the general population, according to a study by the German Sport University Cologne. However, they consume high... Read More

In nutrition news this week, Kate Farms received US$60 million in investments from its final series B round funding. Meanwhile, ADM reported quarterly earnings of US$684... Read More