You are in : All News > Wholegrain Superfood Shown to Have Strong Health System Savings 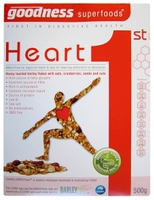 05 Sep 2014 --- Food and beverage manufacturers are aware that consumers are turning to wholegrains to ease the burden of chronic disease. Incorporating superfoods like BARLEYmax in products will help combat and lower the substantial costs involved with chronic health problems like cardiovascular disease, type 2 diabetes and colorectal cancer, a new study has found.

The potential value of improved health outcomes from widespread, regular consumption of BARLEYmax is estimated to be worth $305 million for Australia each year, according to research by Deloitte Access Economics.

BARLEYmax, a natural, high fibre wholegrain with high levels of resistant starch, is delivering these possibilities due to its ability for lowering risks for type 2 diabetes, cardiovascular disease and colorectal cancer.

According to Deloitte, the savings in health system costs from increased dietary fibre intake are also substantial, with its research forecasting benefits of up to $17 million each year.

Obesity, heart disease, stroke, type 2 diabetes and cancer are the leading causes of preventable death in Australia, with obesity alone costing our society and governments over $58 billion in 2008.

According to Robert Burbury, Chief Executive Officer at BARLEYmax — the healthy grain, “Australia needs practical, effective diet and lifestyle solutions that can help reduce the burden of chronic diseases. As the research by Deloitte has revealed, increased wholegrain intake has been shown to combat the risk of certain cancers, heart disease, diabetes, stroke and even help with weight control.

“Manufacturers including superfoods such as BARLEYmax in their products are staying ahead of the game by providing increasingly health conscious consumers with the nutritional foods they demand. BARLEYmax also benefits grain growers, through additional earnings from guaranteed prices for barley and diversification of farm business models.”

Developed by the BARLEYmax Enterprises partnership between CSIRO and Australian Capital Ventures Limited, BARLEYmax has set out to ease the burden of these chronic health issues by capitalising on the possibilities of enhancing the nutritional value of wholegrains, like barley.

Australians have been able to enjoy the benefits of foods containing BARLEYmax since 2009 and are now finding these natural, high fibre products on supermarket shelves throughout the country.

However, despite the potential health benefits provided by wholegrains, the majority of Australians are not including the recommended amount in their diet.

A study by the Australian Grains and Legumes Nutrition Council found that at least 75 per cent of Australians are not meeting the recommended three or more serves of wholegrain foods each day.

According to Burbury, “Australians need to be aware of the increasing amount of research that shows returning to wholegrains and cutting back on refined grains improves health in a number of ways. During CSIRO’s development of BARLEYmax, one particular barley grain emerged as having higher fibre content and enhanced nutritional benefits compared with regular barley.”

The latest BARLEYmax grain was developed through a conventional plant breeding program, which was followed by an extensive schedule of experimental studies, including several human trials.

“Our comprehensive studies and trials have shown that a range of products produced with BARLEYmax as their key ingredient had low glycemic index and also produced positive changes in a range of biomarkers of bowel health,” said Burbury.

One in five deaths – the equivalent of 11 million deaths globally – are associated with poor diet, which also contributes to a range of chronic diseases. In... Read More

A high intake of whole grains has been found to increase the levels of betaine compounds in the body which, in turn, is associated with improved glucose metabolism, a... Read More

And a spoonful of broccoli? CSIRO develops superfood powder suitable for your latte

A broccoli powder has been developed by the Commonwealth Scientific and Industrial Research Organization (CSIRO) and agriculture group Hort Innovation, Australia, in... Read More

Smartphones could be the key to addressing Australia’s significant under-consumption of vegetables, a new survey from the Commonwealth Scientific and Industrial... Read More