You are in : All News > EFSA Panel Deems Vitamin B2 Additive Safe for Animals 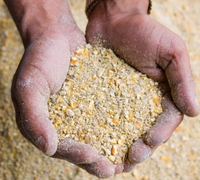 23 Feb 2016 --- Following a request from the European Commission, the Panel on Additives and Products or Substances used in Animal Feed (FEEDAP) has deemed vitamin B2 in the form of riboflavin and riboflavin 5’-phosphate ester monosodium salt as safe.

Vitamin B2 is produced by 2 genetically modified strains of Bacillus subtilis, as an additive to feed and water for drinking for all animal species and categories. Riboflavin is primarily found as an integral component of the coenzymes  lavin adenine dinucleotide and  lavin mononucleotide. Flavocoenzymes participate in redox reactions of carbohydrates, fats and proteins. Riboflavin is therefore involved in the energy metabolism of men and animals.

Wide safety margin
Compositional data on riboflavin containing products produced by either strain did not indicate any substantial difference. Consequently, the conclusions below do not differentiate between products originating from the 2 strains used for fermentation. Riboflavin and riboflavin 5’-phosphate sodium are safe for the target animals with a wide margin of safety, of about 20 to 60 fold compared to the supplementation levels.

06 Dec 2019 --- Limiting food consumption to a ten-hour window each day can lead to weight loss, lower blood pressure and more stable insulin levels. This is according to a pilot... Read More