You are in : All News > Processed meat consumption in the US remains as high as 18 years ago, despite public health guidelines

Processed meat consumption in the US remains as high as 18 years ago, despite public health guidelines

US adults continue to consume more red meat than fish, while chicken consumption has increased significantly, finds a study 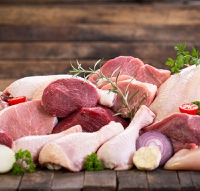 24 Jun 2019 --- US adults eat as much processed meat and as little fish as they did 18 years ago, despite public health guidelines urging  the contrary. This is according to a new analysis published by Elsevier in the Journal of the Academy of Nutrition and Dietetics. The study also showed that one-quarter of US adults are still eating more unprocessed red meat than the recommended level, while less than 15 percent meet the guidelines for fish/shellfish consumption. However, according to the findings, poultry consumption now exceeds that of unprocessed red meat compared to 18 years ago. The findings may support policy improvements to dietary guidelines as well as focusing interventions in locations where processed meat is purchased, such as fast food restaurants. Such actions could relieve the burden of chronic disease linked to diet, according to the researchers.

“While factors other than health (e.g., social, cultural, and economic) can influence Americans’ food choices, the lack of widespread awareness of health risks associated with processed meat may have contributed to the lack of consumption change in the past 18 years. Our findings support further actions to increase public awareness of the health risks associated with high processed meat consumption in the US.”

The study comes as meat alternatives are experiencing accelerated growth in NPD. Consumers are becoming increasingly aware of the adverse health effects of meat consumption, driving a boom in innovation in the alternatives and hybrid meats space. Innova Market Insights reports that meat substitutes accounted for 14 percent of global meat launches in the first nine months of 2018, up from six percent in 2013.

Click to EnlargeAccording to researchers from Harvard T.H. Chan School of Public Health, replacing red meat with healthy plant proteins may be a running start to slashing the risk factors for cardiovascular disease (CVD). The researchers conducted the first meta-analysis of all previously published clinical trials evaluating the effects of red meat on blood lipids and recommend adherence to healthy vegetarian and Mediterranean-style diets, both for their health benefits and also to promote environmental sustainability.

Plant-based products’ growth, however, does not seem to have influenced the consumption of red meat in the US, based on the new study’s results. The research used a nationally representative sample comprised of dietary data from nearly 44,000 US adults, aged 20+, who participated in the National Health and Nutrition Examination Survey (NHANES), through 2016. The investigators assessed trends in consumption of processed meat, unprocessed red meat, poultry, fish and shellfish over the past 18 years and their purchase locations.

In addition to the overall trends noted above using full NHANES data, the research team also compared NHANES data from 1999-2000 to 2015-2016.

For the first time, US consumers are eating less beef and more chicken than they did 18 years, say the researchers. The increase in poultry consumption is flagged as a positive change due to the popular belief that eating red meat increases cholesterol levels.

Click to EnlargeHowever, consuming red meat (such as pork and beef) and white meat (in this case, poultry) may have equal effects on blood cholesterol levels. This is according to a study published in the American Journal of Clinical Nutrition, earlier this month, by the Children’s Hospital Oakland Research Institute (CHORI), US. The study revealed that consuming high levels of red meat or white poultry results in higher blood cholesterol levels when compared to consuming a similar amount of plant proteins.

There is accumulating evidence linking excessive consumption of processed meat to increased risk of obesity, diabetes, cardiovascular diseases and even some cancers. Processed meat has been classified as “carcinogenic to humans” by the International Agency for Research on Cancer (IARC). The American Cancer Society (ACS) and the World Cancer Research Fund (WCRF)/American Institute for Cancer Research (AICR) have both issued recommendations limiting processed meat consumption for cancer prevention.

A study by Dr. Zhang published last month estimated than 14,524 new cancer cases were attributable to high consumption of processed meat in 2015 among US adults aged 20 years and older. The research team notes that future research is needed to identify barriers to reducing processed meat consumption, evaluate the effectiveness of potential public health interventions and explore policies such as nutrition quality standards, excise taxes and health warning labels.

The low consumption of fish/shellfish among US adults could be due to its high retail price, lack of awareness of its health benefits and concerns about mercury contamination in certain fish. However, the scientific evidence suggests that the benefits of fish intake exceed the potential risks for most individuals, the researchers explain.

Given that fish consumption (2015-2016) was only half of the recommended level in the 2015-2020 Dietary Guidelines for Americans, efforts are needed to promote the consumption and variety of seafood, especially those varieties high in omega 3 fatty acids.

“Findings of this study can inform public health policy priorities for improving diet and reducing chronic disease burden in the US. Because stores and fast-food restaurants are main purchase locations for processed meat, future policies may prioritize these as primary sites of intervention for reducing processed meat consumption among US adults,” concludes Dr. Zhang.

04 May 2021 --- Canada-based PlantFuel Life has landed a series of supplier agreements with leading ingredient manufacturers prior to the company’s launch later this year.... Read More