You are in : All News > Gene Therapy Could Aid Weight Loss Without Affecting Bone Loss 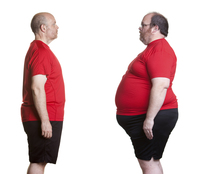 23 Oct 2015 --- Delivering the hormone leptin directly to the brain through gene therapy aids weight loss without the significant side effect of bone loss, according to new collaborative research from Oregon State University and University of Florida.

Rapid or significant weight loss through dieting can trigger bone loss. Loss of bone density, in turn, can lead to increased susceptibility to bone fractures in older adults, which can have a debilitating effect on quality of life.

The bone loss is most concerning in people whose weight fluctuates due to “yo-yo” dieting, or repeated cycles of weight gain and loss, because bone lost during weight loss is not typically regained when the person gains weight again, said Urszula Iwaniec, an associate professor in the College of Public Health and Human Sciences at OSU.

“Weight loss is generally good for you if you are seriously overweight, but bone loss can cause significant problems later in life,” said Iwaniec, whose research focuses on metabolic bone disease and bone health. “What we are trying to determine is whether there is a way to lose excessive weight while preserving bone density.”

In the study, rats who received leptin had a weight reduction of about 20 percent, but they did not have any bone loss. The rats that lost weight were able to maintain that weight loss. They also had large reductions of abdominal fat, also known as “bad” fat, which is known to contribute to weight-related health problems.

The findings were published this week in the Journal of Endocrinology. Co-authors of the paper included Russell Turner, director of OSU’s Skeletal Biology Lab, and several Oregon State University faculty, as well as researchers from the University of Florida. The study was supported by grants from the National Institutes of Health and the Department of Defense.

Leptin is required for normal skeletal growth and maintenance. The hormone also plays a significant role in the body’s ability to maintain weight, telling your brain how much fat you have and if fat stores are sufficient. But people appear to develop leptin resistance with weight gain, and the brain no longer receives accurate messages, Iwaniec said.

To better understand the role of leptin in both weight and bone loss, researchers injected the gene for leptin directly into the hypothalamus of rats and analyzed the effects on their weight and bones. Injecting the leptin into the brain allows the hormone to bypass the blood-brain barrier, which reduces the ability of leptin to enter the brain, Iwaniec said.

But this type of gene therapy, which is essentially permanent, may have other risks or side-effects that are not yet known, the researchers said, and much more study is needed before gene therapy becomes a treatment for weight loss in humans.

“This kind of therapy has the potential for being far less invasive than something like bariatric surgery,” Turner said. “But it’s forever. It seems like a very extreme procedure, from that standpoint.”

Pharmactive Bioactive Products is spotlighting a new animal study that suggests its CSAT+ carob extract, in combination with aerobic exercise and a balanced low-calorie... Read More