You are in : Flavonoid May Help Tackle Diabetes and Nervous System Disorders 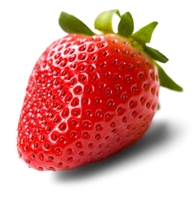 28 Jun 2011 --- The report explains that fisetin, a naturally-occurring flavonoid found most abundantly in strawberries and to a lesser extent in other fruits and vegetables, lessens complications of diabetes.

6/28/2011 --- A recent study from scientists at the Salk Institute for Biological Studies suggests that a strawberry a day (or more accurately, 37 of them) could keep not just one doctor away, but an entire fleet of them, including the neurologist, the endocrinologist, and maybe even the oncologist.

Investigations conducted in the Salk Institute's Cellular Neurobiology Laboratory (CNL) will appear in the June 27, 2011, issue of PLoS ONE. The report explains that fisetin, a naturally-occurring flavonoid found most abundantly in strawberries and to a lesser extent in other fruits and vegetables, lessens complications of diabetes. Previously, the lab showed that fisetin promoted survival of neurons grown in culture and enhanced memory in healthy mice. That fisetin can target multiple organs strongly suggests that a single drug could be used to mitigate numerous medical complications.

"This manuscript describes for the first time a drug that prevents both kidney and brain complications in a type 1 diabetes mouse model," says David Schubert, Ph.D., professor and head of the Cellular Neurobiology Laboratory and one of the manuscript's co-authors. "Moreover, it demonstrates the probable molecular basis of how the therapeutic is working."

Pam Maher, Ph.D., a senior staff scientist in the CNL, is the study's corresponding author. Maher initially identified fisetin as a neuroprotective flavonoid ten years ago. "In plants, flavonoids act as sunscreens and protect leaves and fruit from insects," she explains. "As foods they are implicated in the protective effect of the 'Mediterranean Diet.'"

Other celebrity flavonoids include polyphenolic compounds in blueberries and red wine.

Although her group's focus is neurobiology, Maher and colleagues reasoned that, like other flavonoids, fisetin might ameliorate a spectrum of disorders seen in diabetic patients. To test this, they evaluated effects of fisetin supplementation in Akita mice, a very robust model of type 1 diabetes, also called childhood onset diabetes.

Akita mice exhibit increased blood sugar typical of type 1 diabetes and display pathologies seen in serious human complications of both type 1 and 2 diabetes. Those include diabetic nephropathy or kidney disease, retinopathy, and neuropathies in which patients lose touch or heat sensations.

The study also defines a likely molecular mechanism underlying these effects. Researchers observed that blood and brain levels of sugars affixed to proteins known as advanced glycation end-products-or AGEs-were reduced in fisetin-treated compared to untreated Akita mice. These decreases were accompanied by increased activity of the enzyme glyoxalase 1, which promotes removal of toxic AGE precursors.

The discovery of an AGE-antagonizing enzyme upregulated by fisetin is very intriguing, because substantial evidence implicates high blood AGE levels with many if not most diabetic complications. "We know that fisetin increases activity of the glyoxalase enzyme and may increase its expression," says Maher. "But what is important is that ours is the first report that any compound can enhance glyoxalase 1 activity."

Interestingly, excessively high AGE levels also correlate with inflammatory activity thought to promote some cancers. In fact, studies published by others confirm that fisetin decreases tumorigenicity of prostate cancer cells both in culture and in animal models, which if supported would represent a major added incentive to eat your strawberries.

To ingest fisetin levels equivalent to those fed Akita mice, Maher estimates that humans would have to eat 37 strawberries a day, assuming that strawberry fisetin is as readily metabolizable by humans as fisetin-spiked lab chow is by mice. Rather than through diet, Maher envisions that fisetin-like drugs could be taken as a supplement.

Schubert notes that fisetin is also effective in mouse models of Alzheimer's disease. "We and others have shown that diabetes may be a risk factor for Alzheimer's disease, making identification of a safe prophylactic like fisetin highly significant," he says.

Maher acknowledges that the public may be suffering from flavonoid-fatigue, given media coverage of the promises of these compounds. "Polyphenolics like fisetin and those in blueberry extracts are found in fruits and vegetables and are related to each other chemically," she says. "There is increasing evidence that they all work in multiple diseases. Hopefully some combination of these compounds will eventually get to the clinic."

Schubert concurs that their findings only reinforce what common sense and our mothers told us was a healthy lifestyle. "Eat a balanced diet and as much freshly prepared organic food as possible, get some exercise, keep socially and mentally active and avoid sodas with sugar and highly processed foods since they can contain high levels of AGEs," he advises.

But he also worries that hoops that must be jumped through to bring a natural product like fisetin, as opposed to a totally synthetic drug, to clinical trials are daunting because it is difficult to protect patents on natural products. "We will never know if a compound like fisetin works in humans until someone is willing to support a clinical trial."

Also contributing to this study were Richard Dargusch and Jennifer L. Ehren, Ph.D.,of the Cellular Neurobiology Laboratory, and Kumar Sharma, M.D., and Shinichi Okada, M.D., Ph.D., of the Department of Medicine at University of California, San Diego.

Flavonoid-rich foods – such as berries, apples, pears and wine – appear to have a positive effect on blood pressure levels. This association can be explained... Read More

Blue California’s dihydroquercetin (DHQ) is now deemed Generally Recognized As Safe (GRAS) in a range of foods and beverages following a letter of no objection... Read More

Citrus-derived flavonoids supplier Ingredients by Nature (IBN) has gained patent approval for the use of eriocitrin in its ingredient formulations, including Eriomin.... Read More