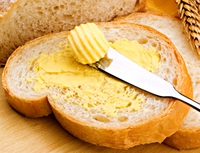 20 Mar 2013 --- The European margarine sector, represented by IMACE, strengthened its Code of Practice on trans fatty acids (TFA) for the third time since its adoption in 1995. While re-affirming the sector’s long-term commitment to public health, it shows how concerted efforts by the industry can lead to successful results.

As European federation of margarine and vegetable fat spreads manufacturers in Europe, IMACE has co-ordinated and led the industry’s efforts towards nutritional improvements of their products. In the early 1990s, as scientific evidence started to prove the adverse health effects of trans fatty acids, margarine manufacturers applied the principle of self-regulation to reduce the trans fatty acid content of their products. The IMACE Code of Practice on trans fatty acid, launched in 1995 and now updated for the third time, is the cornerstone of the sector’s reformulation objectives.

The IMACE Code of Practice states that retail margarines and vegetable fat spreads should contain no more than 2% TFA on fat basis. The Code of Practice also covers business-to-business (B2B) margarines used as ingredients in food products for which IMACE Member Companies commit to actively encourage their customers to use margarine products with no more than 2% TFA on fat basis. To ensure that the ultimate consumer can be informed of the nutritional content of food products, IMACE would support mandatory labelling of trans fatty acids from all sources in all retail food products.

The revision of the Code of Practice was suggested, discussed and approved by all IMACE Member Companies and Member Associations. All of them voluntary commit to complying with its provisions. Since 2004, IMACE is conducting yearly a survey to monitor trans fatty acid and saturated fatty acid content in B2B products and to measure the sector’s reformulation progress.

Retail margarines, vegetable fat spreads and B2B margarines used as ingredients in food products have never been lower in trans fatty acids than they are. B2B margarines, which have to face additional technical challenges, reduced their average TFA level on fat basis by 76% from 2004 to 2012 -from 7.1% to 1.7%, below the levels of butter that can go up to 6% TFA.

This decreasing trend was already acknowledged by EFSA in 2004, which stated that “the intakes of trans fatty acid have decreased in a number of EU countries, mainly due to reformulation of food products, e.g. fat spreads, to reduce the trans fatty acid content.”

For the first time, research by Consensus Action on Salt and Health [CASH] reveals the shockingly high and unnecessary levels of salt in butter, margarine, fats and... Read More

NCEP confirms that “research has clearly shown that lowering cholesterol can reduce the risk of developing heart disease” with diet and lifestyle being key.