You are in : Calorie Control Council: Dr. Oz Inaccurate on Low Cal Sweeteners 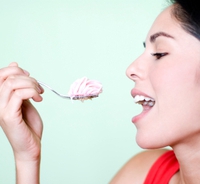 30 Sep 2013 --- A segment on a recent The Dr. Oz Show claiming low calorie sweeteners cause weight gain was not based on scientific facts and made gross exaggerations when depicting average consumer use of sweeteners, according to the Calorie Control Council, whose members include manufacturers and end users of low and reduced calorie sweeteners and other ingredients.

“Dr. Oz likely was referring to the latest flawed opinion piece to make headlines, rather than focusing on the sound body of science that exists when it comes to the safety and quality of low calorie sweeteners,” said Haley Curtis Stevens, Ph.D. of the Calorie Control Council (CCC).  “Numerous studies in humans have shown that the consumption of low-calorie sweeteners does not lead to an increase in feelings of hunger or body weight.”

Further, research shows that low-calorie sweeteners do not lead to heart disease, diabetes or obesity as was suggested on the program.  According to leading health organizations such as the American Diabetes Association,  Academy of Nutrition and Dietetics  and the American Heart Association, low-calorie sweeteners can be used as part of an overall healthy eating plan.  Experts agree that excess weight contributes to heart disease and diabetes, not sugar substitutes.

As Dr. Stevens noted, Oz is likely referencing recent claims that eating low calorie sweeteners leads to cravings and weight gain. However, the claims ignore the large body of robust scientific research that demonstrates the safety and benefits of low-calorie sweeteners (including studies as recent as 2012 published in the American Journal of Clinical Nutrition and the Journal of Nutrition). “I am surprised that Dr. Oz would present the claims as fact,” said Stevens.

Another misrepresentation during the show concerns the discussion regarding the use of sugar substitutes. People use, on average, less than one pound a year of low-calorie sweeteners.  However, Dr. Oz inaccurately depicted a 24-lb average annual consumption of low calorie sweeteners by making the assumption that consumers replace sugar with a sugar substitute in a 1-to-1 ratio. Because sugar substitutes are intensely sweet (150 to 600 times as sweet), requiring very small amounts to attain the same level of sweetness,  they are not added to products at the same level as sugar, an erroneous assumption made by Dr. Oz.

According to Dr. John Fernstrom, Professor of Psychiatry and Pharmacology at the University of Pittsburgh School of Medicine, “Intervention studies have been conducted over the past few decades, and uniformly show that when artificial sweeteners are introduced into the diet (usually in a “blinded” fashion, so the subjects don’t know it), fewer sugars and calories are ingested, and body fat content and body weight are reduced. Low calorie sweeteners by themselves do not make people fat (or diabetic). When overweight or diabetic individuals report consuming more products containing artificial sweeteners, it may be that these products are being consumed to reduce sugar and calorie intake (a good thing), and not the other way around.”